Mt. Diablo Unified School District in northern California has a devilishly good salad bar program thanks to the hard work and dedication of Food Service Director Anna Fisher. Fisher, who began her career as a clinical dietitian, transitioned to school food service 19 years ago and hasn’t looked back since. Starting out as a sub in the kitchen and slowly working her way up the school food ladder, Fisher realized that “…this is where the nutrition and eating habits begin. When I was working with people who were sick in the hospital, that was the end result.”

Since then, she has made it her mission to instill healthy eating habits in her students so that they can escape the fate of the many patients whom she had seen suffering from diet-related disease. Over the years, Fisher and her staff have accomplished this through a commitment to scratch cooking in their kitchens, nutrition education projects like “Tomorrow’s Chefs” competitions, and online culinary training videos. But the star of their healthy meal program has been the salad bars, which allow them to offer a variety of fresh fruits and vegetables every single day.

The process of moving salad bars to Mt. Diablo schools began in 2003, and today the district has proudly implemented bars in 32 of its 49 sites (16 of which they received through Let’s Move Salad Bars to Schools!). Admittedly, when Fisher began, she encountered resistance from her staff. “It was the fear of the unknown, the fear of change,” she explains. “There were lots of concerns that it would take up too much time, waste too much produce, that the kids would make a mess.”

But in practice, the staff saw that salad bar prep took less time than individually packaging produce into ½ cup portions, and that kids wasted less fruits and vegetables when they were able to take the portions they wanted—actually eating what they took. Once one site embraced the bar, Fisher would send other managers to that kitchen to witness their success, talk with the staff, and get comfortable with the idea.  The domino effect of sharing what works and support within the district made salad bars a vibrant and central aspect of the meal program.

Not to mention that Fisher has salad bar training and prep down to a science. Every one of her district kitchens (there are 42 on-site kitchens and one central facility) has a “New Salad Bar Setup” diagram displayed for reference. 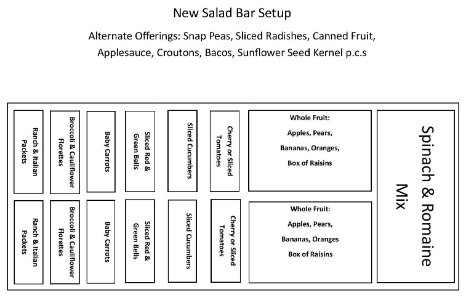 She reports that prep time for each bar is only 15 minutes, and that she’s never had to add additional staff or increase hours to accommodate the bars, though she does count on parent volunteers to help monitor them. “For the most part we do put the salad bars after the POS, and that’s why we need supervision, because that parent monitor also checks to see if they have their half cup of fruits and vegetables required by the USDA.” One to two parent volunteers is all it takes, and they only have to be there for the actual meal service.

When asked if getting the kids on board with the bars was as difficult as the staff, Fisher responded with a smile in her voice:

“There are two things I’ve learned over the 19 years working in this arena:

Fisher has stayed true to these lessons and her students have responded—they love the salad bars. They jump on the red bell peppers, the jicama, the snap peas and the cherry tomatoes. They have grown accustomed to eating fresh produce every day and when they leave school, they continue that tradition. And that is all Fisher could ask for.