Creativity in the Cafeteria: How Nancy Weiss Changed Santa Barbara’s Approach to Nutrition 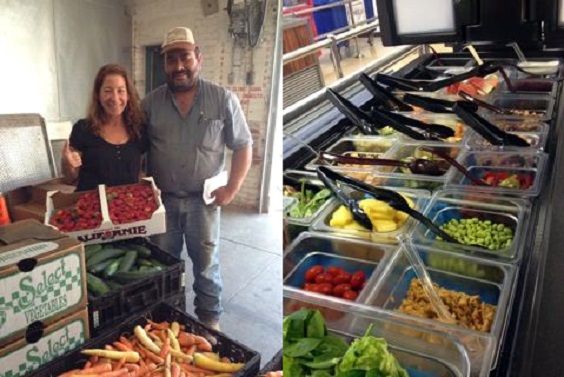 Shortly after finishing her degrees in English and Economics at UCSB, Nancy Weiss had a sudden realization—food was her true passion. So, in 1985, she threw open the doors of her very own restaurant: SOHO Restaurant and Music Club (an establishment still open today). The consistent 18-hour days of running a successful business kept Nancy busy until 1998 when she sold SOHO, but her passion for the food industry remained.

Between her parents’ ailing health and her own need for health insurance, Nancy began working in a local school cafeteria in the Santa Barbara Unified School District (SBUSD). It didn’t take her long to notice significant gaps in oversight, as well as the disappointing nutritional quality of the food. After the presiding food service director stepped down, Weiss jumped in as the interim food service director of the district, eventually taking over the position full-time in 2007.

Weiss inherited the McDonald’s and Taco Bell foods that saturated the Santa Barbara school cafeterias. However, she soon put an end to serving commodity pass-through processed food to students. With the support of the Orfalea Foundation, Weiss trained her staff of 90 to cook for the first time. Focusing on local partnerships, Weiss began serving up scratch-cooked, healthy lunches in the district. Goodbye heat-and-serve!

Weiss explains that the heart of healthier school lunches lies in the salad bar, but she doesn’t stop at produce. Even the sub sandwich rolls come from a local bakery, made with revamped recipes to fulfill the whole grain requirements.

Similarly, Harvest Santa Barbara runs a cooperative of local farms, and Weiss works with them whenever possible. Jose Alcantar (pictured above with Weiss), their primary farmer, has plans to establish a district-owned organic farm and outdoor classroom that will produce food for the district. The majority of the salad bar produce is organic and seasonally grown in Santa Barbara, which they showcase during Harvest of the Month.

Now, parents and teachers are engaging students in healthy food dialogues. Nancy proudly reports, “At the beginning of each month, we conduct tastings and activities during the lunch hour when we invite parents to come and dine with their children.”

The Power of Ingenuity

In Weiss’ first years, SBUSD lost money, a common gripe among schools going through this transition. However, increased labor and food costs, combined with decreased student participation, didn’t dampen Weiss’ vision. Thanks to her determination and resolve, her school district has now been solvent for the past four years.

“Expand revenue potential,” Nancy says. “The way to be successful is to constantly create and think outside the box. You can’t be complacent or you’ll go nowhere.”

To tackle the stigma of free and reduced lunches in the high schools, Weiss has five “Mobile Cafes” (trendy food trucks donated by The Orfalea Foundation) that park outside the school and sell nutritious reimbursable meals to the high school students who otherwise might leave campus…These mobile cafes are also bringing free lunches to local, low-income students during the summer months as part of Santa Barbara’s Seamless Summer meals program.

And those are just a few of SBUSD’s great ideas. Our chef hats off to Nancy Weiss and her team who are setting the table for a healthy future for America’s kids.