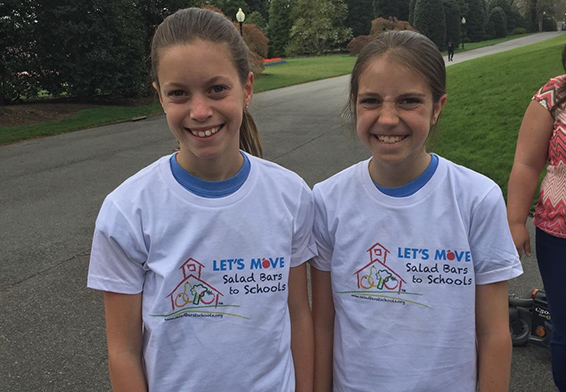 Five years ago, Amelia Anderson and Marley Santos were Kindergarteners starting out at their new school, Foothill Elementary in Boulder, Colorado. Foothill was one of the first schools to receive a salad bar from Let’s Move Salad Bars to Schools.  Now in 5th grade, Amelia and Marley have never had a school lunch without that salad bar.  Fresh fruits and vegetables every day at school is all they know.

As we celebrate the 5-year anniversary of Let’s Move! we also pay tribute to another amazing milestone. Let’s Move Salad Bars to Schools was one of the first initiatives launched by First Lady Michelle Obama’s Let’s Move! program,  so we are also celebrating five years of more salad bars in schools.   This means that more and more kids, just like Amelia and Marley, will only know what it’s like to eat school lunch with salad bars.  They are now the first generation of K-5 graduates to be moving on to middle school having had access to fresh fruits and veggies from a salad bar every day at school lunch.

In honor of the Let’s Move! 5th Anniversary and all the hard work done to date, First Lady Michelle Obama invited each Let’s Move! sub-initiative to bring two children to the White House to help plant the White House kitchen garden…Amelia and Marley packed their bags!

When they were first told they would be traveling to the White House to meet and plant a garden with Michelle Obama, neither one believed it. “Na ‘ah, we are not” was their doubtful response, but the news eventually and finally sunk in. In the midst of making travel plans, the girls were asked to do some pre-trip homework – to start thinking about why having a salad bar was a good thing. At first they returned with blank looks.  I thought to myself, “oh no did we invite the wrong kids? These kids aren’t even excited about the salad bar!” What I came to understand is that it was just an odd question for them. They have never known school lunch without a salad bar, so it was not something that they deemed “special.”

But when I started asking the question in a different way, that’s when the girls’ enthusiasm for salad bars began to show. Marley jumped in with; “What I like most is how fresh it tastes. At the beginning of the year we plant a ton of vegetables. We plant a lot of lettuce and during Rainbow Days it gets put into the salad bar and we get to eat it.” Thanks to the Growe Foundation their school has had an operational learning garden since the girls started.

Amelia said, “I like to put everything together and make a big salad. I get to take the stuff I like.” We know that “choice” is a key component of the success of salad bars in schools. Give kids choice.  Even if it’s between broccoli and cucumbers, the result is student engagement.

At the White House on April 15th, Marley and Amelia gathered with kids from across the country selected to represent the other Let’s Move! initiatives. Together this group was welcomed and introduced to the White House chefs, given a tour of the garden, and then they met the First Lady, ready in her sweats to get down in the dirt with the kids and plant. Marley and the First Lady ended up planting the same garden bed and gabbing like they had know each other for years. Marley talked to the First Lady about everything from her brothers, to her favorite sports, to her favorite meals.

Now, having been back in our hometown of Boulder for a few weeks, the girls have been asked to retell their story many times. They always lead with, “she was soooooo nice,” speaking of the First Lady. “She was totally normal and cool,” they excitedly explain. That part is still surreal for them and makes this trip one that they will always remember and tell stories about for years to come. But for these girls, planting gardens, having a salad bar as part of school lunch, and eating fresh food is just life – it’s nothing special. I think that is the ultimate benchmark of success, and what I will always remember.