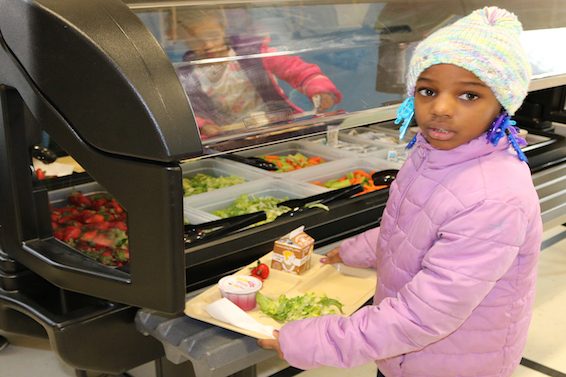 The mission of a Director of Nutrition Services to bring salad bars to students of all ages.

When Kayla Leu joined Iowa’s Bettendorf Community School District as Director of Nutrition Services, there were already existing salad bars* in the district’s middle and high schools. She quickly set out to provide the same resource for the district’s elementary schools as well. By 2017 she had made great progress, receiving four salad bars from Salad Bar to Schools and successfully incorporating them into the district’s meal program.

When the idea of salad bars at the elementary schools was first in the works, a meeting was held with cafeteria staff. Initially, the staff had concerns, worrying they wouldn’t have enough time to prep or that they would have trouble ensuring students were taking appropriate portions of fruits and vegetables. However, they took solace in the fact that the middle and high schools had experienced such success with their salad bars. As the salad bars were implemented at the elementary schools, staff quickly realized their work load did not increase. In fact, the salad bar allowed them to prep fruits and vegetables in bulk rather than in pre-portioned plastic cups. By eliminating the pre-portioned cups, they were also able to reduce their waste stream. 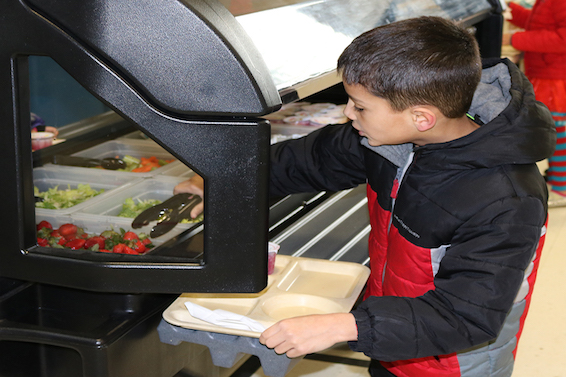 The district also cycles out their menus throughout the schools to help streamline their service and procurement process. Monday’s menu at the elementary school is Tuesday’s menu at the middle school and high school. Each day, there are at least two varieties of fruits and two varieties of vegetables at the salad bar. Some of the students’ favorites include fresh strawberries and grapes.

Director Leu has been very pleased with the Salad Bars to Schools grant experience and the way the students have responded to the new salad bars. They love exploring the choices available to them on the salad bar and having the agency to serve themselves. She explains, “They enjoy making their own choices. This is something they get to control and do on their own. If they want all grapes, or if they want strawberries and broccoli, they can make that decision. The kids love the independence to choose what they want to put on their tray.” Director Leu is in the process of applying for Salad Bar to Schools grants for the remainder of the district’s elementary schools, and she looks forward to having salad bars in all schools.

*The Salad Bars 2 Schools grants in Bettendorf Community School District were made possible by donations from Warden Hutterian Brethren and Potatoes USA.